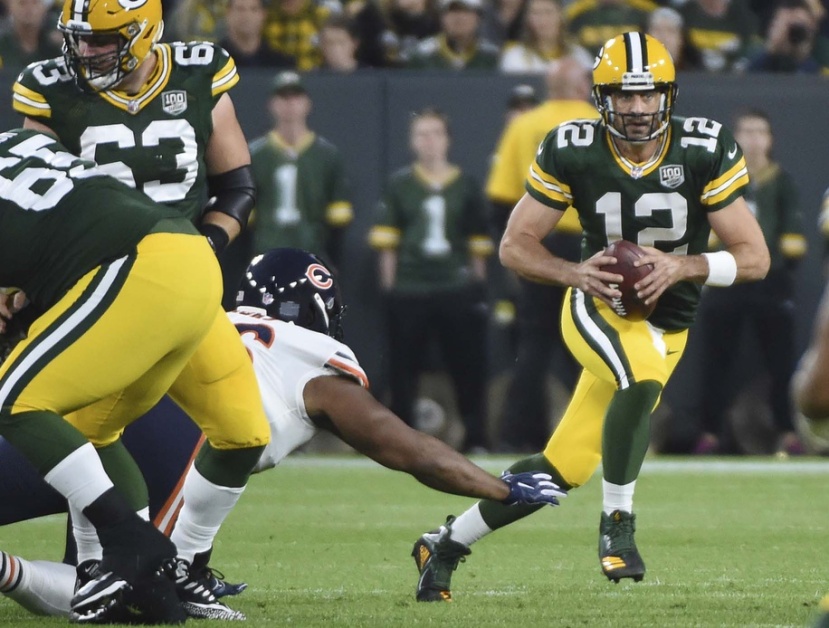 The Green Bay Packers (5-7-1) will look to keep their slim playoff hopes alive Sunday afternoon as they take on the Chicago Bears (9-4) in a noon kickoff at Soldier Field in Chicago.

Some notes on the matchup:

The keys for Green Bay on offense:

Establish the run: This is easier said than done against a defense allowing just over 82 yards per game on the ground. But of the four games this season the Bears have allowed 100 rushing yards or more, they’ve lost three. The Packers, who managed just 69 rushing yards in the week one matchup, should look to get Aaron Jones and Jamaal Williams going early in hopes of establishing a consistent and dynamic game plan as the game wears on.

Tempo & rhythm: If there is one element from the miraculous week one comeback Green Bay should look to emulate, it’s the quick, rhythm passing game coupled with a calculated sense of urgency. In that game, obviously, Aaron Rodgers was limited in his mobility during the second half and had to make plays from inside the pocket. This time around, it will be vital to stick to a similar approach against a terrifying Bears front that comes into the game with 40 sacks on the year, especially with an offensive line that will be operating below 100 percent.

Turnovers: Chicago enters the game with a league-leading 34 forced turnovers on the season, including 25 interceptions. Aaron Rodgers has thrown just one pick on the year. It certainly seems like something has to give, and the Packers can’t afford to give possessions away.

The keys for Green Bay on defense:

Close the pocket: While Bears quarterback Mitch Trubisky has certainly improved in his sophomore campaign, he has still shown inconsistencies when he has to stand in the pocket and go through full progressions. Head coach Matt Nagy has helped his young quarterback immensely by scheming quick, easy reads, but Trubisky has still shown a propensity for pulling the ball down. When he sees green grass in front of him, he usually tries to take it, and his above average athleticism can make him tough to corral in those situations. If the Packers can pinch the pocket and not allow Trubisky those escape lanes, they’ll make things a lot easier on themselves.

Contain Cohen: Tarik Cohen leads the Bears in receiving with 63 catches and 679 yards. Those aren’t necessarily elite receiving numbers, until you consider that Cohen is a running back. Green Bay has struggled mightily this season when their linebackers have been forced into coverage on opposing running backs, and you can bet Matt Nagy knows it. It will be very interesting to see how Packers’ defensive coordinator Mike Pettine chooses to deal with the shifty Cohen, particularly early in the game.

Turnovers: Even though the Green Bay defense has forced just 14 turnovers on the season, they’ll be hoping last week’s two-takeaway game against Atlanta lit some kind of spark. In Chicago’s four losses, they’ve turned the ball over nine times. Turnovers are the kind of thing that tend to come in bunches, and if the Packers can get one early, the game could turn dramatically.

In the week one preview, I said the result would come down to the quarterbacks. It took some Aaron Rodgers magic, but that turned out to be a correct assessment. Given what the Bears defense has shown in the two and a half months since that night, the fact that Rodgers was able to author such a comeback of that magnitude seems even more improbable than it did at the time. That defense has put Chicago in a position to clinch the NFC North with a win on Sunday, while shoddy, inconsistent play has landed the Packers in the emergency room, their playoff hopes on life support. Rarely would I suggest betting against Aaron Rodgers, whose career record against the Bears speaks for itself. This time around, though, it just doesn’t feel like there’s enough magic left in the tank. Bears 24, Packers 17.