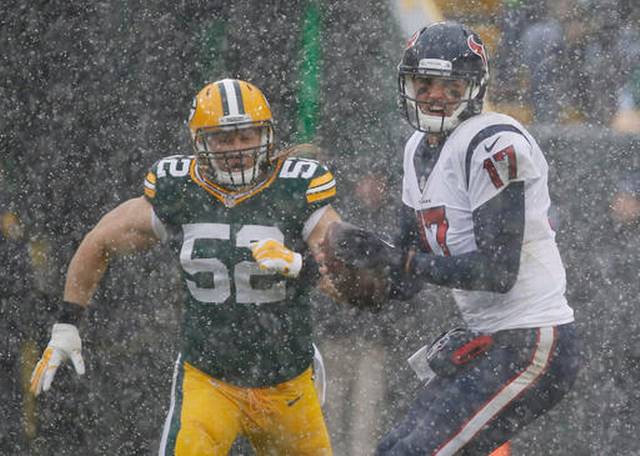 The Green Bay Packers (6-6) won for the second consecutive week and kept their playoff hopes alive once again with a 21-13 victory over the Houston Texans (6-6) Sunday afternoon at a snowy Lambeau Field. Here are my immediate thoughts on the win:

Grind it out. After essentially controlling the entire game in Philadelphia last week, the Packers were forced to take a different route to victory in their first home game in a month. Though it certainly felt like Green Bay controlled the first 30 minutes, they led just 7-0 and halftime and found themselves in a tie ballgame after the Texans scored on their first possession of the second half. Nonetheless, Green Bay used drives of 98 and 89 yards to put the game away. December games often become all about how well you can finish, and the Packers finished strong Sunday.

Spread the love. It was all hands on deck for Green Bay against the Texans. Five different players carried the ball for the Packers, including a nifty reverse for Jeff Janis that gained 19 yards. In addition to the diverse rushing attack, Aaron Rodgers completed passes to seven different receivers. Jordy Nelson had a fantastic day, hauling in eight balls for 118 yards and a touchdown. The more potential threats you can put on tape, the more your opponents have to prepare for. Green Bay will need contributions from everyone as they continue their late season push.

Defense back? Make no mistake, the offenses the Packers have faced the past two weeks are by no means elite. That doesn’t mean the Green Bay defense can’t use their performances in those games as a jumpstart heading into next week’s clash with Russell Wilson and the Seahawks. Despite a few missed tackles and a few decent running lanes throughout the game, the defense stepped up and got the job done when it mattered. The test should be significantly tougher next week, but the improvement we’ve seen over the past two weeks can’t be denied.

Clay Matthews. He was clearly hampered by his shoulder injury today. Outside of being non-existent on the stat sheet, the Packers’ use of Matthews was spotty enough to raise questions as to the status of their defensive playmaker. After starting the game on the inside next to Jake Ryan, Matthews exited the game after a near-sack and seemed to return only in down-specific situations after that. He was able to play all four quarters, however, which is encouraging.